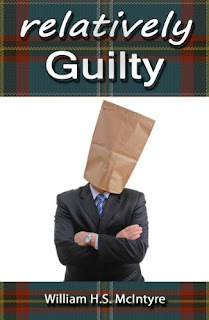 Relatively Guilty by William H.S. McIntyre
99p/$1.40
Amazon UK, Amazon US, Smashwords
William H.S. McIntyre is a partner in Scotland’s oldest Law Firm. For the past twenty years or so he has worked in the field of criminal defence and has managed during that time, and with the full co-operation of Mrs McIntyre, to produce four sons and a series of stories featuring defence lawyer, Robbie Munro.
What was your motivation for writing Relatively Guilty?
Write about what you know, is the advice given to would-be authors. After twenty odd (some of them very odd) years as a criminal defence lawyer, I thought it would be good to write something that would inject realism and humour into an area of crime fiction that is often factually inaccurate and usually populated by dour, po-faced, legal-types. As an admirer of John Mortimer’s writing, my ambition was to write a series of stories about a Scots criminal lawyer whose view on the justice system was akin to what I imagined a young Horace Rumpole’s to be. I was really chuffed when one Amazon review described my main character, Robbie Munro, as just that.
How much difference does a good cover make?
I’m sure an eye-catching cover is extremely important when it comes to attracting prospective customers, but I’m equally sure that it’s the blurb that clinches the sale – at least it does for me.
Did you have any other titles in mind?
I’d originally intended the book to be called 'Twinfish,' for reasons that should become obvious to readers; however, some thought the title a trifle ambiguous. Apparently, the average crime fiction reader becomes disorientated if there aren’t words like 'Justice', 'Blood' or 'Guilty' written in big letters on the cover and so it was good-bye 'Twinfish' and hello 'Relatively Guilty'.
What's the best piece of craft advice you've been given?
Take a step back. Write the story and then leave it alone for a month or so. When you return you’ll be amazed at the number of obvious mistakes you simply hadn’t noticed previously. It’s the next best thing to an editor.
What's the best piece of business advice you've been given?
Get the cash upfront – but that’s because writing’s my hobby and my business is criminal defence.
As a reader, how would you describe your taste in crime fiction?
Eclectic - although I do prefer stories that are viewed from the perspective of someone other than a cop. Ian Rankin’s books are excellent, but, generally speaking, I feel that there are too many disillusioned, divorced, detectives with drink problems out there.
If you had to re-read a crime novel right now, what would you choose?
Most crime novels are not re-read friendly because once the butler has been led off to the slammer there’s no point reading it over again unless you have a very short memory. For that reason, if you can classify them as ‘crime’, I’d plump, perhaps predictably, for the Rumpole stories by John Mortimer. The ending of each tale is completely by-the-by and even the occasional weak plot-line is raised to heights of excellence by superb prose and the presence of that greatest of fictional legal characters: Horace Rumpole. An extremely close second would be ‘Blood Hunt’ by Neil M. Gunn; a true classic.
What are your views on eBook pricing?
From an author’s point of view, it would be nice to be able charge a price that reflected the work involved. Unfortunately, it’s all very cut-throat with authors prepared to give their books away for pennies, or even for free.  I’ve heard it said that you can’t expect readers to shell out on a previously unheard of writer, but with most ebook providers, certainly Amazon and Smashwords, allowing readers to download lengthy samples, it’s not as though readers are taking a huge risk. By the time someone has read the first 10 or even 20 per cent of a book, they must surely know if they want to read on. If they do, why not pay a reasonable price for the privilege? With millions of ebook readers out there looking for something to put on their Kindle or whatever, they’re going to pay providing the price remains competitive to dead tree publishing.
Of course, from the reader’s viewpoint there are some great bargains out there; however, with the proliferation of ebook authors that means a lot of samples to be read. What the ebook reading world really needs is a degree of ready-made quality assurance.  With a traditionally published author at least there is an element of that; however, we all know that many good writers slip through the net because agents and publishers don’t see them as marketable. At the moment the onus lies with ebook forums to provide reviews on which readers can rely and base their purchases. Unfortunately, many of these soon become sites for flagrant self-promotion. What we need is more independent ebook sites like this one. If enough of these sites arise and build solid reputations, readers will begin to feel sufficiently confident in the recommendations given and, hopefully, more inclined to pay a decent amount for a well written book. So - keep up the good work, Al!
Relatively Guilty by William H.S. McIntyre
99p/$1.40
Amazon UK, Amazon US, Smashwords
Posted by Allan Guthrie at 04:26