The Paperbacking of Bye Bye Baby

Bye Bye Baby is police thriller that tells the story of a very unusual kidnapping. It may be a novella, but it's the most important book I've ever written.

It was originally scheduled for publication in July 2010. A few months after I handed in the finished manuscript, that date was revised to July 2011. Then, sometime during 2010, I was advised that the publication schedule had changed again and Bye Bye Baby wouldn't be seeing the light of day until 2013. Damn and blast, I thought. Or words to that effect. Who'd have thought it would turn out to be one of the luckiest breaks I've ever had as a writer?

Barrington Stoke very kindly offered to let me have the rights back in case I wanted to publish elsewhere. I didn't, because I like what they do, and I'd enjoyed writing Kill Clock for their Most Wanted series for reluctant readers, and was stoked at the thought of Bye Bye Baby being part of the same series.

So I asked if they were planning on doing anything with the digital rights, and if not, could I have those and Barrington Stoke could keep the paperback rights. They were delighted with the idea, and so began my foray into e-publishing.


I'd observed the success of John Rector, one of my JBA authors and one of the self-publishing Kindle pioneers. I'd seen his US sales figures for The Grove and was duly impressed. But Bye Bye Baby was a short novella, a Scottish police procedural, and the Kindle was in its infancy in the UK, so my expectations for sales of my own wee effort were minimal. (Plus, I'm no John Rector. Check out his books, you'll thank me for it).


I uploaded the ebook version of Bye Bye Baby to Amazon in Aug 2010. Between August and November, inclusive, Kindle sales were even more minimal than I'd anticipated. I sold 13 copies.


Undaunted (in fact, I was extremely daunted – 2010 was not a good year: my primary publishers on both sides of the Atlantic had dropped me, unsurprisingly, since my sales figures were mince; and having mince for sales figures makes it extremely difficult for a new publisher to welcome you on board), I decided to throw everything into giving Bye Bye Baby a real shot at selling a few copies. I was my own publisher after all, and I should be doing what publishers do, instead of sitting around moping.


I'd also acquired the digital rights for Killing Mum, a novella published in print by Crime Express in July 2009. I e-published it at the start of December, and then started looking for ways to sell Bye Bye Baby. First obvious strategy was the world's oldest publishing promotional tool: price. I dropped mine from $2.99 to 99 cents. That meant a royalty cut from Amazon (70% down to 35%) but given that I'd been selling only half a dozen copies a month, I was hardly running the risk of throwing away a fortune.


I spent a long time on the various ebook forums, finding the Writers Café section of the Kindleboards in particular a goldmine of useful advice, stats, tips, warnings, new opportunities, etc. I posted on the UK Kindle Users Forum and Mobile Reads and others. But I got most traction from a thread on the Amazon.co.uk Kindle forum that eventually ran to over 70 comments. I set up Google alerts for all the successful indie authors. They led me to new ebook-interest sites. I read their interviews. I read their blogs. I adopted their strategies where they seemed applicable. I sent off a lot of review copies. I gave lots of copies away. I tried everything to bring Bye Bye Baby to the attention of new readers in the hope that the more people who read me, the more likely it would be that some of them might enjoy what they read and tell others. I allocated two hours a day to engage in marketing and promotion, and I didn't rule out anything (well, apart from Facebook: gotta draw the line somewhere!).


The result of all that activity? I got lucky. December Kindle sales for Bye Bye Baby jumped to 232. Quite a difference. I kept up the marketing into January, trailing off halfway through. By then, the Amazon recommendation algorithm had kicked in. I was unaware of its enormous impact at the time, but my guess is that much of my marketing efforts resulted in only a few sales. Getting those early sales in volume during December was crucial, though, because that's what triggered the subsequent recommendations. (For more on the Amazon recommendation algorithm, check this out).


I did very little marketing in February, during which Bye Bye Baby was in the top ten in the Kindle store for most of the month. It peaked at #6. Sales for the month were 9379.


By that point, Bye Bye Baby was my best-selling book. And that remains the case today, with sales of well over 35,000 copies. Killing Mum, which I never pushed much beyond a few mentions on the forums, reached #25 in the Kindle store. Best guess is that was as a result of being recommended to customers who'd bought Bye Bye Baby. Killing Mum has now sold over 11,000 copies.


If it wasn't for Barrington Stoke postponing publication of Bye Bye Baby, I'd never have self-published. And if I'd never self-published, I'd have had no chance (or desire, even) to persuade Polygon, publisher of my backlist novels, to let me sub-license the Kindle rights to Two-Way Split and Slammer, which are now out in new, improved editions. If I hadn't had experience in self-publishing ebooks, I would never have hooked up with Kyle MacRae, and Blasted Heath would never have been born. There would be no Blasted Boxset!


And a final side-effect of publishing the digital edition of Bye Bye Baby – and the reason for this extremely long-winded blog post – was that it helped bring forward publication of the paperback edition. I'm delighted to say that Bye Bye Baby is now available in print. And a lovely little book it is too. 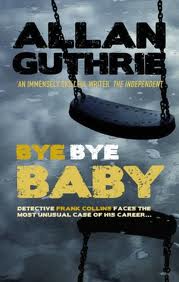 "a quick, taut thriller... not a word is wasted" – Ian Rankin

"A story that moves quickly, in short chapters of crisp prose, with plenty of plot turns to hold the attention, and characters you can love and others you can hate... Like Guthrie's full-length novels, Bye Bye Baby is sly, noir as all hell (more noir than some, actually), and it just might bring a tear of pity to your eyes. It's a police procedural filled with incident and back story, and man, what an ending." – Detectives Beyond Borders

available from
Amazon UK | Waterstone's | WH Smith |The Book Depository
and other fine bookshops
Posted by Allan Guthrie at 16:43 9 comments