1: If you're in Glasgow and free on Mon 30th January, I'll be giving a talk at the University of Strathclyde. This is open to the public, entry is free, and kicks off at 5pm. More details can be found here.

2: Blasted Heath has launched a new daily book recommendation with the bewitching acronym of #broth (Book Recommendation On The Heath). You can join in too. Check it out here.

3: You may have noticed that Criminal-E has been on something of an interview hiatus. Well, that's about to end very soon. I have some fine ebook crime writers lined up who will be revealing all. Well, maybe not all. Although that's an idea...

4: A while back I created a highly indulgent list of my top 200 noir fiction titles. It stops in 1997. My new Italian publisher, Revolver, has asked if I'll update it with a list of the best noir since then. Looking forward to this.

5: More Blasted Heath news. Next month sees the launch of The Unburied Dead by Douglas Lindsay and Wolf Tickets by Ray Banks, stonking books both.

6: And more events: Stuart MacBride is at Blackwell's in Edinburgh on Thu Feb 2nd (free, 6.30pm) and Len Wanner will be grilling Tony Black at Mayfield Library in Dalkeith on Sat 4th Feb (free, 6pm).

8: There's some pretty interesting information to be gleaned from Verso's 2011 Survey of Book-Buying Behaviour.

9: I'm very happy to say that the excellent Connie Haag is translating Bye Bye Baby for the German digital market.

10: And finally, I'm currently revising Kiss Her Goodbye, which will be the next of my novels out on Kindle. Here's a first look at the cover. 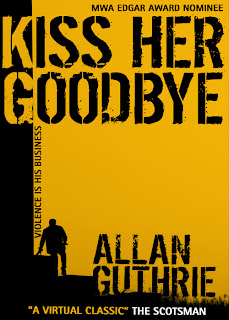 Big Day For Hilda And A Savage Night Out 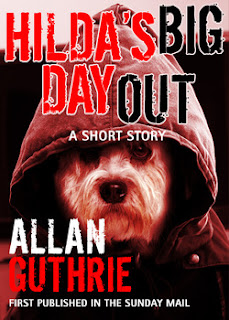 Hilda's Big Day Out was commissioned by the Sunday Mail as its seasonal short story and published in the newspaper on Jan 1st. I've made it available on Kindle FOR FREE from now thru Jan 10th. You can get it by clicking on Amazon.com or Amazon.co.uk.

It's a tale of violence, abduction, and pilchards, told from the perspective of a Dandie Dinmont terrier called Hilda, who's whisked away from a deserted Edinburgh beach by a skinny stranger on New Year's Day. (You may recognise Hilda as Pearce's dog from Hard Man and Kill Clock).

Also included are three bonus stories: Your Mother Should Know (from the Pulp Ink anthology); Bye Bye Baby (from Shattered: Every Crime Has A Victim) and Call Me, I'm Dying from A Hell of a Woman: An Anthology of Female Noir.

Nigel Bird (the man behind the excellent collection Dirty Old Town)  has some very kind words to say about Hilda over at his Sea Minor blog, as does McDroll (the talent behind Kick It and co-editor of The Lost Children charity anthology) at her I Meant To Read That blog (some other great freebies mentioned there too from Anthony Neil Smith & Victor Gischler, Heath Lowrance and Fingers Murphy). 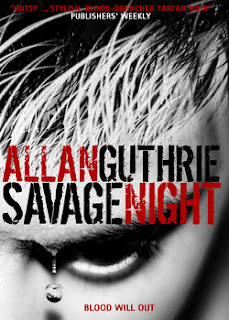 Also just published on Kindle for the first time is a revised version of Savage Night, my Tarantino-inspired tragi-comic crime thriller about a blood feud. This was the prequel to the novella, Killing Mum.

You can download Savage Night from Amazon.co.uk here, (not available in North America where my erstwhile publisher, Houghton Mifflin Harcourt, controls the ebook rights, sorry). It's currently 99p.

How much blood would you spill to avenge those you love?

Andy Park passes out at the sight of blood, but he thinks he’s discovered a way to make his family’s enemies pay. He isn’t prepared for the fallout, though. Before long, his teenage son is in mortal danger and his daughter and her fiancé are forced to carry out his dirty work.

Meanwhile, a masked man known only as Mr. Smith is blackmailing Tommy Savage—for what, he has no idea. And after an attempt to gain the upper hand has near-fatal results, Tommy and his brother, Phil, find themselves heading to a graveyard with only a couple of swords and a bag of cash for company.

Will they survive the night? Will anyone?

With equal parts blood phobia and blood lust, Savage Night is a cinematic tragi-comedy of love and violence that unfolds over six short blood-blind hours in Scotland’s capital city.

According to the Observer, Savage Night is "a black comedy akin to the work of Christopher Brookmyre and Douglas Lindsay..." and "if you have a robust sense of humour, you'll love this." I hope so!