Ten Things I Learned Since Saturday 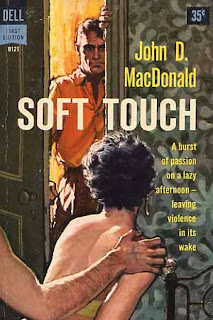 1: The Trap of Solid Gold is an excellent blog dedicated to the work of John D MacDonald, creator of Travis McGee and author of many other great paperback originals, my favourite of which is Soft Touch.

3: Daily sales of 18-25 since Saturday are enough for Two-Way Split to nose into the top 100 thrillers on Amazon UK. The week-on-week sales increase is almost certainly driven by Amazon's recommendations. First month's sales were 155. Already this month: 135. Total UK sales still lag behind the US (739/872), which you'd never guess from their current rankings: under 500 in the UK and over 15,000 in the US.

5: Penguin, the publishing house that invented the mass market paperback, believes that the format will all but disappear, according to Publishing Perspectives: “in essence, the mass market is becoming digital.”

6: DD Scott demonstrates the power of free, selling more books in a month than in the previous year: more at the Writer's Guide to e-Publishing.

7: eReaderIQ is a free service that – among other things – lets you know when a Kindle title you're interested in comes down in price.

8: The Google eBookstore is now in the UK. It's far from intuitive for publishers. Spent 30 minutes trying to trying to find out if I could sign up and getting constantly directed to blank screens. End result: I'm no wiser than I was when I started. So I haven't really learned anything much at all. Better have another #8.

9: The Kindle will be available in France from Oct 14th. Wonder how long before Spain.

10: And finally, Grift Magazine claim there's something interesting in the offing. “There are a lot of people publishing eBooks out there these days, either on their own or with the help of a publisher – be it bootstrapping indie or Big 6 imprint — and it is clearly the future of publishing. The winners will be the ones who innovate, do something different. I’ve been given a sneak peek at one such operation, about which I can’t report much, but suffice to say they’ll be making headlines soon.”

Some great writers on board there: Anthony Neil Smith, Ray Banks, Douglas Lindsay, Gerard Brennan. I've heard rumours of a few others too. Looks to be an exciting line-up.
Posted by Allan Guthrie at 08:28 5 comments

Ten Things I Learned This Week

1: To have a better understanding of Tartan Noir, you should read The Incredible Hulk, according to Bookchums. Who knew?


2: If you want to allocate ISBNs to your ebooks, Nielsen's best practice is to provide different ISBNs for different formats, just like physical books. I had assumed it was one ISBN for all ebooks, but, no, PRC (Kindle), ePub, PDF all require separate ISBNs.


3: The percentage of publishers in the offering their ebooks to libraries could be as low as 20% (via the Bookseller).


4: Advertising ebooks on Facebook would appear to be even more of a waste of money than I thought. Not a big fan of paid advertising in any case, but if you do want a decent return for your buck, I'd imagine you're much better focusing on the kind of places where ebook readers hang out. Anecdotally, Kindle Nation and Pixel of Ink are two names that keep coming up.


5: Roz Wood should write more reviews. This one of Slammer is her first blog entry.


6: The shelf-life of an ebook bears little relation to the shelf-life of a physical book. We're conditioned to accept that books sell massively in the first few weeks of release, then taper off quickly. The Kindle version of Two-Way Split sold 16 copies in the yesterday – just over three months after its release. That's more than any other single day so far. Sales have grown steadily week on week since it was released.


7: Formatting issues are more easily resolved if you use Open Office than Microsoft Word. I knew this already but I had yet another reminder. Open Office is free (and compatible with MS Word).


8: continues to embrace digital like a good 'un with the launch of a new digital imprint: Bloomsbury Reader.


9: No matter what I try, sometimes I just can't leave comments on blog posts. I wanted to leave one here to say, "Don't pace yourself! Read Beast of Burden now, it's a classic piece of contemporary noir," but all my attempts have been foiled. I frequently can't leave comments here either. I know, that'll teach me to use Blogger.


10: Plans for expurgated editions of my books are a non-starter. I was seriously considering it – it's easily done with ebooks. But this one-star review of Bye Bye Baby about the 'foul language' shows the likely futility of such an exercise. If I was to expurgate my books I'd be using Bye Bye Baby as a yardstick. As Ray Banks points out in this post on the topic of swearing, there's minimal (and minor) bad language in the book (the strongest swear word is 'shit'). So, f**k that.
Posted by Allan Guthrie at 05:21 8 comments