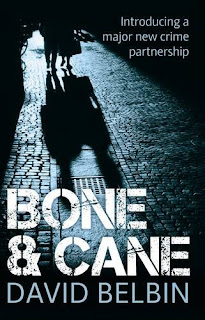 Bone And Cane by David Belbin
£1, Amazon UK
David Belbin is the author of more than thirty novels for young adults, but this is his debut adult crime novel. He was born in Sheffield but lives in Nottingham, where he teaches creative writing part-time at Nottingham Trent University.
Can you sum up your book in no more than 25 words?
‘1997. Labour MP Sarah Bone seems about to lose her seat. Nick Cane, her drug-dealer ex, gets out of prison. They’re drawn back together when...’ I’m out of words and I haven’t even explained that it’s a double murder mystery with a surprising amount of betrayal thrown in. And quite a lot of sex.
What was your motivation for writing it?
As someone who was very active in left wing politics in the 1980s, I’d always wanted to write about that era, and long intended to document New Labour when it eventually got into office. I even went so far as to arrange myself a researcher job at the Commons in 1997 so that I could get background for my projected novel about an idealistic new MP entering government. My local MP took me on, but Labour Chief Whip Donald Dewar (who gets a cameo appearance in ‘Bone and Cane’) nixed it.
That worked out for the best, because I’ve since realised you can only really explore an era in retrospect. Also, I hope that, by now, I’ve developed the skills to tell the story through the prism of the crime novel and reach a wide readership, including those who don’t care about party politics. It took a while to find a publisher, Tindal Street Press,  who understood that this was a mystery which also happened to be a love story, a historical novel — even, to some extent, a literary novel — and were happy to run with that. These days it seems like everybody wants to put you in one particular box. I’ve been writing for a long time now. All kinds of stuff, but mostly Young Adult novels, half of them in the crime genre. I’m ready to make my own box.
How important is a good title?
Crucial. The original title of ‘Bone and Cane’ was ‘Previous Convictions’, which actually sums up the plot in all sorts of way, but sounds generic. The final title is far more memorable and especially apt since the publishers agreed that it should be the first in a sequence.
As a reader, how would you describe your taste in crime fiction?
Wide ranging, with a particular accent on American writers like Ed McBain and Lawrence Block. Peter Temple’s ‘Truth’ is my favourite crime novel of recent years. I like all of the writers who feature in the Crime Express series of novelettes, which I edit, but I’m too tactful to say which are my favourites. Do check out the new ones, published this month! Ray Banks, Stephen Booth, Danuta Reah and Charlie Williams.
What are you reading now?
I tend to have several books on the go. At the moment my daytime read is Paul Wilson’s ‘The Visiting Angel’ because I’m doing a reading with him on Sunday at Birmingham Book Festival (4pm Birmingham Conservatoire, Paradise Place). It’s an absorbing, intelligent novel with a very intriguing set-up. My musical read is Rob Young’s exhaustive, excellent history of psychedelic folk, ‘Electric Eden’. I loved the first part of Seth’s graphic novel ‘Clyde Fans: Part One’. Must finish that soon. I’ve been following Luke Kennard, a quirky young poet, since I came across him on a blog and just bought his new pamphlet, 'Planet-Shaped Horse' from Nine Arches. I read the same book in bed every night, alternating crime fiction and more literary stuff. I found Paul Auster’s ‘Sunset Park’ in the Crime section of my local library, which I suspect was a mistake, as nothing illegal has happened at the halfway point. It’s a good light read, ideal for bedtime. Auster is, I think, his own genre.
If you had to re-read a crime novel right now, what would you choose?
‘This Sweet Sickness’ by Patricia Highsmith. I’m saving that up, having just reread ‘Deep Water’ after finishing Joan Schenkar’s terrific new biography of Highsmith.
What's the best collection of short stories you've read?
Can I go for a ‘Best of’? Last week I devoured the eight new stories in ‘Park City’, a career retrospective by Ann Beattie. She’s the writer who got me really interested in the short story form when I discovered her in the late 70s. At the beginning of my career I published a lot of short stories and I’ve returned to the form recently. On Sunday, I reread ‘A Vintage Thunderbird’ (originally in ‘Secrets and Surprises’) from that era, and it thrilled me just as much as it did back then. Full of insight, humour, economy, technical bravery and deep human sympathy. Which is what all authors should aim for, all the time.
Bone And Cane by David Belbin
£1, Amazon UK
Posted by Allan Guthrie at 03:26