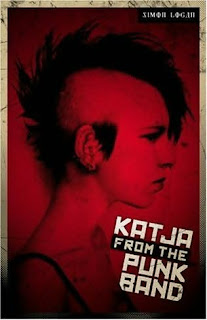 Katja From The Punk Band by Simon Logan
£1.14, $1.60
Amazon UK, Amazon US
Simon Logan is the author of the industrial fiction novels Katja From The Punk Band, Pretty Little Things To Fill Up The Void, the industrial short story collections I-O and Nothing Is Inflammable and the fetishcore collection Rohypnol Brides, as well as many other short stories. His next novel, Guerra, is set to be published by ChiZine Publications in Fall 2012.
Can you sum up your book in no more than 25 words?
Katja From The Punk Band is a fast-paced industrial crime thriller with multiple storylines that constantly intermingle and interconnect with one another – Jackie Brown meets the Sex Pistols.
What was your motivation for writing it?
I’d just finished writing my first novel, Pretty Little Things To Fill Up The Void, which came in at just under 100,000 words so I wanted to write something that was lighter and faster in tone. I often feel, when I am writing, that I should be bulking up the prose a little to make it richer and more detailed and just thought that for a change I would do something very stripped down.  I wanted to write something that was little more than the outlines I’d made for the story and something with the various storylines constantly tripping over one another.  I also liked the idea of just throwing the reader into the middle of it then filling in the gaps later on.
What's your favourite part of the writing process?
I think the initial plotting part is the most liberating when you are just throwing around ideas and building up what is effectively the building blocks from which you construct the story.  At that point you just come up with whatever you want and don’t have to worry too much about whether it will work, how it will work, or if it will all fit together.  With that said, because I plot quite heavily in advance, this means that when I come to actually writing a scene I already know pretty much exactly what is going to happen so that gives me free reign to just concentrate on the actual sentence construction and that is often very enjoyable.
How much difference does an editor make?
No idea, I’ve never really had one beyond simple spelling and grammar checks.
What aspects of marketing your book do you enjoy?
I think that interviews are the only bits that I don’t mind too much, pretty much every other aspect of marketing myself or my books doesn’t sit comfortably with me.  Particularly with the rise of self-publishing you have a massive amount of writers all wanting to get attention for their work which means an awful lot of self-promotion shoe-horning itself into other places.  In real life I hate attention, doing whatever I can to avoid it, and this seems to translate into the electronic world too.  As much as I know it’s necessary to push my work to ensure it gets attention it’s against my nature to effectively stand amongst all these other people and say “look at me!”  So I do what I can but it’s difficult for me.
How much difference does a good cover make?
Rightly or wrongly I think it makes a massive difference.  One thing I’ve noticed with the eBook revolution is that it doesn’t matter how good a person’s book is, if it has a crap cover it just puts me right off.  I don’t know why people seem to spend so little time on such an important aspect of the buying process and so often I see books with just awful covers, the literary equivalent of a tie-dyed t-shirt or an animated gif.  Covers are a tremendous opportunity to market your book and it’s a shame so many people miss out on it.
What do you look for in a good book?
Interesting ideas and characters which are well-executed, basically.  I think if you’re going to spend a year (or however long it takes) writing a book then why produce something that is similar, if not identical, to a lot of stuff already out there?  For me, writing is about expressing myself, about creating something that adds something or pushes at boundaries so I tend to hone in on books and authors who are quite unique in style or ideas.  Chuck Palahnuik, Will Christopher Baer, Jack O’Connell, these are all authors whose work, to me at least, stands out as being apart from everything else and so they would be the ones I tend towards.  Any author who, when you ask someone who they are like, the person has to struggle to think of anyone.
How do you feel about anyone being able to publish?
I think that in and of itself is a positive thing.  Yes it means that there are more crappy books out there if people can just publish themselves without having to go through the usual channels of publishers and editors which are supposed to separate the wheat from the chaff but the very fact that we have all read books which we think should never have been published shows that those channels are far from perfect.  In addition traditional publishers need to make a profit so will always be biased towards that which is going to make them money whereas being able to self-publish cheaply should provide a far greater range of books to choose from.  Ultimately it’ll be up to the writer to ensure their product is well put together and if it isn’t then they will fail just as they would in submitting a badly-formatted manuscript to a publisher.
Katja From The Punk Band by Simon Logan
£1.14, $1.60
Amazon UK, Amazon US
Posted by Allan Guthrie at 03:41

Email ThisBlogThis!Share to TwitterShare to FacebookShare to Pinterest
Labels: Katja From The Punk Band, Simon Logan