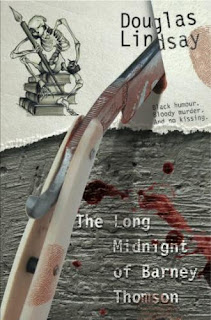 The Long Midnight of Barney Thomson by Douglas Lindsay
71p/99c
Amazon UK, Amazon US
Since the late 1990s, Douglas Lindsay has written seven Barney Thomson novels, some of which have been translated into German, Italian, French and Hungarian. He is also the writer of the political thriller Lost in Juarez.

Can you sum up the Barney Thomson series in no more than 25 words?
Murder, comedy, blood, haircuts, philosophy, metaphysics, politics, enlightenment, serial killers, grotesque violence, a deaf mute hunchback and the true resting place of the Holy Grail.
All that in each book, or is it spread through the series?
A bit of both. Some of those things you’ll find from page one of the The Long Midnight of Barney Thomson, but you’ll have to wait until Book 5 – The Last Fish Supper – for the hunchback and the Holy Grail. As for the comedy, I believe there’s a joke on page 37 of Book 6.
What was your motivation for writing the series?
For the first book I liked the setting where it was natural to have plenty of conversation with a backdrop of not much action. Sit in any barbershop in the world, and you will hear the most absurd philosophical pish being spoken on any day of the year. It’s a great setting. So it worked well for that first one. Thereafter, I was paid to write the next five, so that was very motivational. By the time I wrote number seven I was stuck on autopilot, but a good autopilot, the kind of autopilot that takes off safely, lands safely, and feeds you caviar and champagne in between while letting you watch a great movie.
Who designs your covers?
A nice Polish graphic designer named Iza, who lives somewhere near Krakow I believe. I’ve never met her and she doesn’t speak any English, so we’ve communicated largely through shouting. Early on I got my multilingual friend to explain to her that in general my books were pretty bloody, and we’ve gone from there. So, I say that Iza is nice, but really all I’m basing that on is her ability to make a cool pencil drawing of a skeleton.
How important is a book's central character?
Now, there’s an interesting point. Generally one would say that the central character ought to be likeable, but if not, at least interesting. I think a lot of people probably find Barney Thomson neither. He’s a bit of a dour, miserable sod. So, I hope he’s interesting, and I hope he provokes sympathy in the reader, but then I’ve had enough people tell me otherwise. After book 3, when the storyline gave me the opportunity, I changed his character into an Edmund Blackadder of sorts. I suppose I’d had enough of dour and uninteresting, and wanted more of a philosophical but cool observer of life. The story allowed me to do it organically, rather than do a blatant switch from Sean Connery to Roger Moore.
What's your favourite part of the writing process?
I find the first draft quite hard going, but really enjoy the second and third drafts; as long as I don’t find that I need to rewrite too much. I enjoy the process of tightening up, reshaping paragraphs and cutting a hundred words down to seventy.
Ever tried your hand at screenwriting?
Well, yes I have. The screen option for The Long Midnight of Barney Thomson has been pretty much taken for the better part of the last twelve years, by three different sets of people. The first pair asked me to write the script, which was a lot of fun, and involved several lunches with people that had made big movies with actual Hollywood film stars. It’s the coolest thing I’ve ever done, although let’s not get carried away about that actually being all that cool. Sadly the film never got made with my script, but it did make me look at the story in a lot more detail than I’d ever looked at it when writing the book. I kept thinking of great ideas that it was too late to use.
I also wrote an original screenplay called The Monkfish Cowboy, which was optioned and developed and had a director attached, but it floundered in development hell. One day, however, it will resurface and be a hit romcom starring someone or other. I just don’t know who yet.
What was your favourite book as a child?
I read a lot of the Hardy Boys when I was ten and eleven, and then moved straight from that to Harold Robbins. The first one I read was The Betsy. Early on there’s a scene with the main character having sex, and he describes his girlfriend as “climbing the walls”. I was an innocent wee twelve year-old, and sat there trying to visualise how you had sex halfway up a wall. But I read The Betsy several times – it’s about cars and women – so I’ll say that over The Mystery of Cabin Island or The Secret of Pirates’ Hill. I think I went off the Hardy Boys when I realised that Franklin W Dixon was a committee, rather than a kindly old gentleman sitting at a typewriter overlooking the New England coastline.
The Long Midnight of Barney Thomson by Douglas Lindsay
71p/99c
Amazon UK, Amazon US
Posted by Allan Guthrie at 03:43