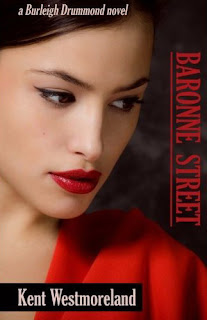 Baronne Street by Kent Westmoreland
£2.14/$2.99
Amazon UK, Amazon US
Kent Westmoreland drifted into New Orleans several years ago and immediately immersed himself in the dark underbelly of the city.  He has been known to hang out with con men, bluebloods, wise-guys, politicians, and the occasional honest cop.  He credits his relationships with these unsavory types as the basis for his novel BARONNE STREET and his Burleigh Drummond short stories. His website is: http://www.kentwestmoreland.com/
Can you sum up BARONNE STREET in no more than 25 words?
When an ex-girlfriend is brutally raped and murdered, New Orleans fixer Burleigh Drummond must rely on his Machiavellian skills to solve and avenge her murder.
What was your motivation for writing it?
I wanted to write a novel that was heavily steeped in the tradition of Dashiell Hammett and Raymond Chandler, but with a protagonist who would go against type for the hard-boiled genre.  He wouldn’t carry a gun or use his fists.  His weapons would be brains, charm, and aplomb.  Occasionally trickery, blackmail, and bribery would be employed; I never intended for him to be a choir boy.
Ever tried your hand at screenwriting?
I’m actively seeking a buyer for the film rights to BARONNE STREET.  I hope to have a hand in the screenplay.  Though no readers or reviewers have mentioned it, there’s a little something in the third act I want to change.
If you had to re-read a crime novel right now, what would you choose?
The Little Sister by Raymond Chandler.  The running commentary on the breakdown of the nuclear family astounds me.  In 1949 this breakdown was just beginning in the United States, yet Chandler accurately predicted the long-term impacts it would have on society.  I also like that at the end Marlowe is not sure if he really understood the case or accomplished anything.  The existential Chandler novel.
How do you feel about reviews?
Reviews are a valuable promotional tool.  I try not to get the big head from the positive ones and don’t get offended by the negative ones.   The negative reviews are more beneficial to me as a writer.  That reviewer might be helping me identify a weakness.  I’m realistic enough to know I can improve.
How do you feel about awards?
Like reviews they help get the word out and generate interest.  Hopefully interest generates sales.  Besides, who doesn’t want to be told their work is good and receive a prize, too?
What was the last good eBook you read?
John Raven Beau, a hardboiled police novel, by O’Neil De Noux.  Set in pre-Katrina New Orleans, police officers are being ambushed and murdered.  The force becomes desperate as the ambushes escalate and they have no leads.  John Raven Beau, a half-Cajun and half-Sioux police officer, begins his own hunt for the killer. De Noux’s novel is compelling and gritty as his work always is.
From an artistic rather than financial perspective, what book do you wish you had written?
That book would be The Horse Latitudes by Robert Ferrigno.  I love the voice, the rhythm, the characterizations, the narrative drive, everything.  When the novel was first published I was an evangelist for it.  I even purchased copies and insisted my friends read them.  I have not found Ferrigno’s subsequent novels as compelling, but obviously many others do.
Baronne Street by Kent Westmoreland
£2.14/$2.99
Amazon UK, Amazon US
Posted by Allan Guthrie at 03:26