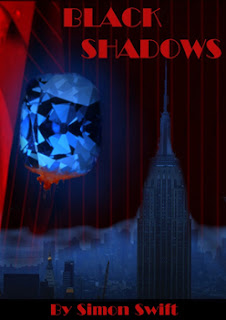 £2.83/$4.54
Amazon UK, Amazon US
When rookie private detective Errol Black gets mixed up in the killing of gangster Dutch Schulz, he vows to clean up his act. But when his former partner, Dyke Spanner, is shot to death, Black is drawn into a violent and bloody quest for a mythical, priceless diamond.
Can you sum up your book in no more than 25 words?
Black Shadows is a crime novel blending fact and fiction. In the finest hardboiled tradition, it is filled with gangsters, dames, villains and red herrings.
How did your book come to be written?
I have been a voracious reader from an early age, and in my teens fell in love with the adventures of hardboiled detectives Sam Spade and Mike Hammer. A Humphrey Bogart season of black and white movies introduced me to film noir.
After University, I embarked on a 12 month odyssey of adventure, traveling the world. Alongside my odd pair of clean clothes and stack of paperbacks, my most treasured possession was the notebook, which contained the chrysalis of my own hardboiled novel.
Many years, re-writes and editing later the result was Black Shadows, a crime novel which blends fact and fiction.
How long did it take you to write?
Probably more than ten years, although it was sitting in a cupboard for most of that! In writing time, less than a year. The sequel is rolling along at a fair old pace, though and will be ready as Black Shadows hits the shops.
Who designed your cover?
A wonderful man, known as JP Noel, who makes Indiana Jones look like a deskbound academic. He is about to release to the world his own astonishing work of non-fiction revealing the location of the Ark of the Covenant. In and amongst all his adventuring he found the time to bang out the front and back covers for Black Shadows. Take a close look at the back. As JP put it to me, can you see the lady with the huge knockers?
How important is a good title?
Alongside the cover, a good title is crucial. A great example of both is Jake Barton's Burn Baby Burn.
Do you have any other projects in mind?
The sequel to Black Shadows is almost finished. It is entitled The Casablanca Case and although this immediately makes the reader think Bogart, Bacall and a war torn Africa, it is set in a fictional American town.
What's your favourite part of the writing process?
I love sitting down at my desk with a spark of an idea, a fresh white page in front of me and just letting the writing flow. Once you get into this zone wonderful things can happen. Editing and polishing comes later, but the best writing is a spontaneous creation.
As a reader, how would you describe your taste in crime fiction?
Varied. I like the really dark stuff that needs reading over and over again, but love Lee Child's Reacher series, which can usually be read in a sitting or two.
What was the last good eBook you read?
Burn Baby Burn by Jake Barton.
What are you reading now?
Having long admired American author Max Allan Collins' Nate Heller series, I am delighted that he his now working with the late Mickey Spillane's lost Mike Hammers. My current read is the The Goliath Bone, which combines the best of both authors and is a cracking hardboiled thriller.
If you had to re-read a crime novel right now, what would you choose?
It would always be Ellroy's Dudley Smith trio, possibly the finest trilogy of crime fiction ever written, featuring anti-hero Lieutenant Smith, who you just can't help loving. Despite his ghastly crimes, it was always a relief that he made it to the next instalment!
Who's your favourite living writer?
It's got to be Ellroy for crime, closely followed by Peace and Collins. I am also a huge admirer of guys like Haruki Murakami and Khalid Hosseini who have written some of the most awe-inspiring novels ever written.
Where do you find out about new books?
You can't beat simply browsing in the local bookstore, although increasingly I find new material from the internet and blogs such as this. 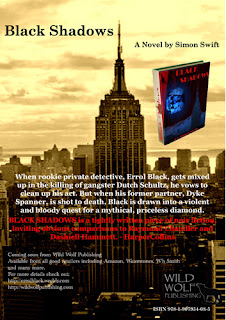