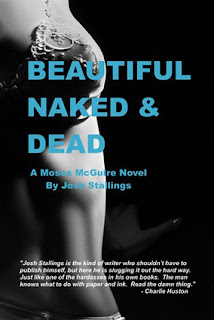 Josh Stallings is your average ex-criminal, ex-taxi driver, ex-club bouncer, film making, script writing, movie advertising editing, crime writing punk. Time has mellowed him. Lucky for those nearby. Beautiful, Naked & Dead is his first novel.
Can you sum up your book in no more than 25 words?
A suicidal tittie bar bouncer’s best friend dies ugly. He goes on the road, fueled by booze, drugs and rage, he is out for revenge.
What was your motivation for writing it?
Truth, James Crumley wrote too slow. I was happy working as a film editor and occasional script doctor / screenwriter gig. But I had a hardcore addiction to Crumley and it was sometimes three years between books. So it was time I filled the gap. My first attempts were dreadful mockish tripe. But I kept slamming keys and over a few years I found my own voice. No longer attempting to fill a Crumley sized hole, I was trying then and now to fill a Stallings sized hole. Fits much better.
What was your favourite book as a child?
Ok, you have to promise not to tell... Winnie the Pooh.  I don’t think any book influenced me more until in high school I read Fear and Loathing in Las Vegas.
Who designed your cover?
I did. Funny since I work at BLT & Assoc., one of the top movie ad agencies in Hollywood. I’m surrounded by print people and graphic designers, all crazy busy, so I took a crack at it. I like the 70’s/80’s look that came together. Simple and eye catching I hope.
How important is a good title?
Vital - my first title was Price of Love. It was going to be a whole series of Prices, Beauty, Lunch you get the idea. Deborah Beale, author and editor pointed out that they sounded like romance novels. Pissed me right off.  Hell I had a plan. I spent a weekend coming up with every title I could think of, Beautiful, Naked & Dead came to the top. I’m glad she pushed the point.
Do you enjoy the editorial process?
Do I? Fuck.  I turn my tiny defenseless story over to cruel bastards who cut it to ribbons and then leave the pieces in a bloody box on my doorstep with a note, ‘FIX IT.’ The writing on this first note looks strangely like my wife Erika’s hand. She is my first and toughest critic. Brutal, she is the cage fighter of tact. I suck it up and try not to cry in front of her.
On Beautiful, Naked & Dead I have been blessed with editorial notes from writers Tad Williams, Deborah Beale and Charlie Huston. “You’re a good enough writer to be treated like a pro, so gloves are off.” Tad said that before spending the next three hours telling me why my manuscript sucked balls. And after plastering up my bleeding ego I thanked him. Then I spread the broken and battered parts out on a table and started to stitch it back together. Somewhere in the rewriting it gets to be fun again. My internal editor shuts up and I get to spend time doing a craft I love.
What is your clear obsession with strippers?
Why do you say that?  Because my novels take place in strip clubs, and the indi- film I directed and co-wrote with Tad Williams took place in a strip club, and my latest short story is set in one... Hmmm.  Yes, I see how it could look. My mother asked the same question after reading the book,  “was it because your father left us for a stripper?”  she asked.  Could be, or the fact my sister was a stripper when she was a teen. Or maybe I just like naked women, I mean really who doesn’t?
I can’t tell you how many men ask me - “how much of the book is based in reality?”  What they want to ask is “do you fuck strippers?”  I never answer the question. All good novels are the absolute truth. All good novels are complete lies.
Fact is sex for hire fascinates me, the laws make no sense but then again neither does how we feel about it as a society. A coal miner can choose to take a job that ruins his body and kills him with black lung by fifty. But that same man can’t choose to be paid to give a blow job. In Los Angeles strip clubs you can’t sell booze if a dancer shows her vulva or nipple. This has created two classes of clubs - A) clubs where girls grind their parts in your face, but you are stone cold sober.  It’s no place to party, more of a GYN training session. B) clubs where the girls dance in bikinis and you can get drunk and play pool and party. The girls press the law and wear the smallest G-string possible (no pubes showing is the law.) And for a top they put black tape X’s over their nipples. This really highlights the tiny pieces of flesh real estate that has people all in a lather.
I watched them demand a strip club’s billboard get taken down while across the street a billboard hocked cellphones with a picture of a girl humping a phone, no lie. We use sex to sell everything but sex. And I find all these dichotomies fertile ground to plow.
Do you have any other projects on the go?
I am editing Out There Bad, the second Moses McGuire novel. It should be out this summer. I am in the early plotting stages of the third McGuire novel.
28 Things I’ll Never Do Again is a memoir I have notes on and it will need to be rewritten. That and a day job as a movie trailer editor. Life is full. Life is good.
Beautiful, Naked & Dead by Josh Stallings
£2.14/$2.99
Amazon UK, Amazon US
Click to read a Moses McGuire short story over at Paul Brazill's website.
Posted by Allan Guthrie at 03:36