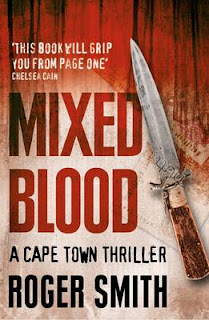 Mixed Blood by Roger Smith
£4.70/$8.38
Amazon UK, Amazon US
Roger Smith was born in Johannesburg and now lives in Cape Town. His thrillers, Mixed Blood & Wake Up Dead have been published in six countries. His third book, Dust Devils, will be out in 2011.
Can you sum up Mixed Blood in no more than 25 words?
An American bank robber, hiding out in Cape Town with his family, is targeted by street gangs and a rogue cop.
What was your motivation for writing it?
I grew up under apartheid in South Africa. As a teenager in Johannesburg, I watched white cops mow down black school kids my age during the 1976 youth uprising. Disaster Zondi, Mixed Blood’s Zulu investigator, is one of those kids 30 years on. And my rotten cop, Rudi Barnard, is a relic from the apartheid era, roaming the badlands of Cape Town, still slaughtering people darker than himself.
People say Cape Town looks like the south of France, or California, just more beautiful, but the Cape Flats – a sprawling ghetto outside the city home to millions of people of mixed race – is no paradise: the rape, murder and child abuse statistics are the highest in the world.
A few years ago, I visited a mixed-race man in prison. He’s in his thirties, a human canvas of prison gang artwork. Since the age of fourteen he has spent a total of two years out of jail. He knows if he ever goes out into the world again he won’t stand a chance, will end up where he always ends up: back in prison. Part of that man found his way into my ex-con night watchman, Benny Mongrel.

The real catalyst was a TV news report about an American couple who’d robbed banks in the US and were hiding out in Cape Town. After they were captured they were sent back home to do serious prison time. This story made me think: “what if?” What if a man with a past, a man on the run – Jack Burn – brings his family to Cape Town, seduced by those images of mountains and beaches and freedom? What if they are building new lives for themselves when they are confronted by a random act of violence – a collision between the Cape Flats and privileged Cape Town – that hooks them into the world of Rudi Barnard and Benny Mongrel and Disaster Zondi? Those “what ifs” became Mixed Blood.
As a reader, how would you describe your taste in crime fiction?
Give me a good noir. I like the dark stuff. I don’t read police procedurals, and cozies and capers leave me cold.
If you had to re-read a crime novel right now, what would you choose?
Last week I downloaded The Hunter by Richard Stark for my Kindle and I’m re-reading it for the umpteenth time and loving it. I first read it when I was about 12 and Stark’s stripped-down prose and amoral universe blew me away. Proof that protagonists don’t have to be nice.
Do you read outside of the crime genre?
Definitely. Amis, Roth, Richard Ford, Cormac McCarthy and Denis Johnson are authors I never miss. And Ian McEwan is astonishing – he generates more suspense than most genre writers.
Ever tried your hand at screenwriting?
Yeah, I have a movie background, having produced, directed and written a lot for film and TV. Having a screenwriting background helps with plot, structure, pace – and dialogue of course. It also encourages a certain leanness, stylistically. I don’t really do much of that work now – happily I’m able to concentrate on my novels. The irony is that Mixed Blood and Wake Up Dead are in development as feature films in the States but I’m not involved in writing either of the screenplays.
What's the best piece of craft advice you've been given?
Elmore Leonard’s famous 10 Rules are all gems, but I especially relate to rule #10: “Try to leave out the parts that readers tend to skip.” Words to live by.
Do you have any other projects on the go?
My third book Dust Devils is out later this year and I’ve just completed and sold my fourth. It’s called Capture right now, but that’s subject to change. I’m getting up the courage to face the blank monitor and start on number five.
Mixed Blood by Roger Smith
£4.70/$8.38
Amazon UK, Amazon US
Posted by Allan Guthrie at 03:28