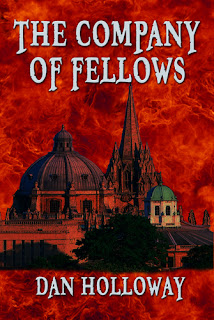 In terms of my own writing I have two things on the go. There’s All the Dark Places, the next Tommy West thriller after The Company of Fellows. It’s about an elderly writer whose ramblings about a horrific murder she claims to have witnessed are dismissed as the ravings of an old woman slowly losing her mind when it becomes clear they are lifted from the plots of novels she wrote 40 years earlier. But Tommy thinks she may have written those novels to shed light on unsolved deaths that occurred during student riots in Oxford during the late 60s. And when he arrives at her house one day to find that she’s died in a fall he is even more convinced.
Publishing-wise, on June 1st I’m bringing out Penny Goring’s The Zoom Zoom, the most extraordinary debut collection of shorts and poems, and Stuart Estell’s mind-boggling novella Verruca Music, through the eight cuts gallery press imprint. I’m also polishing Black Heart High, a young adult dark urban fantasy/paranormal romance I’m publishing to Kindle on June 1st
The Company of Fellows by Dan Holloway
70p/99c
Amazon UK, Amazon US, Nook
Posted by Allan Guthrie at 03:05