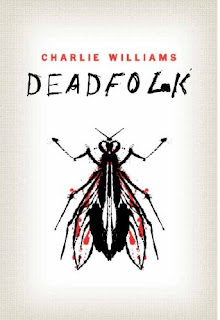 Deadfolk by Charlie Williams
£0.99/$0.99
Amazon UK, Amazon US
Charlie Williams is the author of the Mangel series featuring unstable doorman Royston Blake, and Stairway to Hell, about a pub singer who becomes convinced that his soul was switched with David Bowie’s at birth... by Jimmy Page. More at charliewilliams.net.
Can you sum up Deadfolk in no more than 25 words?
A small-town bouncer’s courage is questioned, undermining his self-image as a local big-shot. Taking some bad advice, he sets about trying to prove himself. Violence ensues.
What was your motivation for writing it?
I had tried writing several novels set in the world I lived and worked in, but none of those really caught fire. Then I started writing something new and the main character’s voice came out stronger and more clearly than anything I had written, and I wanted to tell his story. Along with his voice came the setting – a hellish exaggeration of my home town (Worcester) which insisted on being called Mangel. When the story started taking shape, I think I wanted it to be the British equivalent of one of those small town American noir novels by guys like Jim Thompson or (the other) Charles Williams, and that was a motivation. Whether or not it turned out like that, who cares? It got the damn thing done.
How would the local tourist board describe Mangel?

If there were a local tourist board they would try to have Mangel excised from official maps and records. Outsiders not welcome. But to the locals they would paint the town as having everything a person can need, and Hurk Wood is a great place to go camping.
How much difference does an editor make?
For me and this book, not a great deal in terms of the shape of the novel and way I wrote it. But my first editor, John Williams, was able to make me see the book in a new light. It’s like you’ve done one of those giant chalk figures on the side of a hill, but you can’t stand back and see it as a whole. A good editor can take you up in a helicopter.
Who designed your cover?
An in-house designer at AmazonEncore. They asked me what I wanted on the cover but I tend to give abstract answers to that question. It’s someone else’s job and you have to let them get on with it. Saying that, if I don’t like a jacket image I will say so and try to get it changed – it’s my name that goes next to it on the cover. But, unless you are self-publishing, asking is all you can do. The publisher is turning your text into a product and the cover is part of that.
How important is a good title?
Very. If your title is a cliché with no irony at all, you can forget about me picking it up. If it is simple but quirky and makes me wonder why the hell you called it that, I’m going to read the blurb. That’s as far as a good title will take you, but it’s an all-important step.
Where did the title, Deadfolk, come from?

I was going to call it Simple Folk, but luckily realised how crap a title that is. Then it was Killing Folk, which is what happens quite a bit. Then I chanced on Deadfolk, all one word, which sounded snappier. You have menfolk and kinfolk, why not describe corpses the same way? Also it points to the mental scope of the people around Blake. Maybe, just maybe, he is a creative genius born into the wrong environment. Maybe he would have been an artist if he came from, say, Newport Pagnell.
How important is a book's central character?
Extremely. This is a massive generalisation, but I think there are two types of novels: those where stuff happens to the central character, and those where that character does stuff. Both are valid and can be great, but you need to know which you are writing. If it’s the first type, your main character could be an everyman. You want him or her to be a surrogate for the reader. If it’s the latter, it’s all about the protagonist. The reader does not have to identify but we need to know what makes him tick... and it better be something intriguing.
Can you sum up Royston Blake in a couple of sentences?

A violent, ignorant thug with delusions of grandeur. But can we blame him, considering his environment?
What was your favourite book as a child?
I read lots as a kid but the first book that blew my mind was Stephen King’s “Christine”, when I was about 13. What struck me was the language, the way he told a story in such an easy way, with the rhythms of conversational speech. I realised then that “normal people” can be writers. God knows what that means but it’s what I thought at the time.
Do you enjoy writing?
I do. And I think all writers do, no matter what they say, because how would they have discovered their ability to write otherwise? But there is not much easy gratification to be got from writing. It’s probably more like gardening. I think people who like working in the garden get the same pleasure as writers. You get out there and brave the elements, getting calloused fingers and a bad back, but you do it because you know you’re setting up something good in the end if you get things right. Saying that, I hate gardening.
How would you feel about being described as an absurdist?

I would be fine with that. I walk through life and the thing that strikes me above all else is the absurdity of everything, so in that sense I am an absurdist. Whether or not I am an absurdist writer is for others to judge, but it is a label I would be happy with. I am a fan of Beckett, Ionesco and Genet from way back.
Do you think crime fiction and comedy are uneasy bedfellows?

Yes. People often baulk at the idea of a crime comedy because they picture something dumb, like Police Academy or Carry on Coppers (did they ever make that film?) The word “comedy” is the problem, I think. Comedy, comic, caper... these are all words that conjure up notions of frivolity and slapstick. But people want darkness in crime, they want danger and transgression and conflict. I want those things too, and I strive to put them in my books, but I also let the laughs in too when they come. As it turns out, I seem to put enough laughs in to warrant the “comedy” tag, so here we are – I’m saddled with the uneasy bedfellows... as are you, Allan. Maybe it’s our job to get those fellows more easy with each other in bed? Or at least persuade readers that it’s OK to watch them, erm, in bed.
How do you feel about reviews?
I’m fine with good or bad reviews – as long as they are honest reactions from a reader who has given the book a chance. With the kind of books I write, not everyone is going to get it, and that’s as it should be. What I dislike are lazy bad reviews, where the reviewer makes assumptions beyond the text and has clearly skipped sections. By the same token I should dislike lazy good reviews, but I find those OK.
How do you feel about awards?
They are inherently flawed because neither art nor entertainment can be measured in the same way as a race or a game of football, so it all depends on the tastes, prejudices and allegiances of one particular set of judges. But I’d be happy to go back on all that if I won one.
What's been happening since Stairway To Hell?

I’ve been lounging on my yacht, drinking pina coladas, ingesting huge amounts of cocaine and firing my AK-47 at the feet of crew members to make them dance. Also I wrote a novella, Graven Image, which is not yet in an electronic format but I’m planning to do that.
I heard a rumour that there was a fourth book in the Mangel trilogy? Is there any truth in this?

Hey, do you know what? It is true! One Dead Hen will be out in print and electronic format in August. I wrote it a few years ago but the publisher rejected it due to bad sales of the previous book in the series, King of the Road (“This is gloriously funny stuff and so original that other writers must be gnashing their teeth in jealousy” – The Guardian... *ahem*). It took a Facebook campaign (called Free the Mangel One – please join if you want to follow Blakey’s publishing travails) to finally get it placed with a new publisher, AmazonEncore, the parent company of which I’m sure we can all guess. When they read and accepted One Dead Hen, I mentioned that the other three titles in the series were just out of print, and they snapped them up too. And here we are.
Why don't you write police procedurals?

After all the books I’ve read, I’m not even sure what one of those is. To me it means your cop protagonist has to follow recognised rules in catching a criminal. But what if your cop thinks he knows better and nonchalantly breaks all those rules, whilst still attempting to catch the killer? And what if he isn’t quite a cop yet but is trying to be one, and models himself on Sonny Crocket from “Miami Vice” and Sledge Hammer (from “Sledge Hammer!”)? If this can still be a police procedural, then One Dead Hen, which is out in August, falls into that genre.
What has been your single greatest moment of pleasure as a writer to date?
Probably the moment I decided that, yes, I’m going to have a proper crack at this. I have enjoyed plenty of things since then but there’s no beating the click of things slotting into place.
Deadfolk by Charlie Williams
£0.99/$0.99
Amazon UK, Amazon US
Posted by Allan Guthrie at 04:07