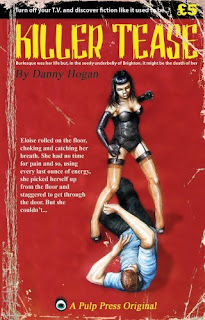 Danny Bowman was the bassist and founding member of Oi!/street punk band Gundog, had his own stall in Camden market and ran English pubs in Paris, France for six years until he threw himself full time into writing and publishing. He founded Pulp Press in 2008 and writes pulp and post-apocalyptic stuff and publishes pulp novellas. He also is the marketing manager at Indepenpress Publishing so you could say that he lives and breathes publishing and literature.

Can you provide an overview of Pulp Press?
Pulp Press puts out entertaining adult books. The books are designed to provide a quick and easy reading experience that leaves the reader satisfied.
How did you become a publisher?
I was offered to have my book published at the London Book Fair of '08 by Indepenpress. But after looking at how other publishing companies operate, particularly in the mainstream, I thought I could do better. So I proposed to run an imprint for Indepenpress based along the lines of pulp fiction of the '50s and '60s. The name and concept came to me almost spontaneously.
What was your launch title?
Killer Tease. Wrote it in two weeks, published it within three because I was worried that Indepenpress would change their minds. 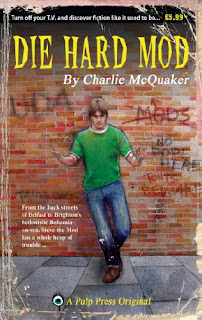 What's your bestselling title and why do you think that is?
Die Hard Mod by Charlie McQuaker. Hands down our biggest selling and was the tenth biggest seller on Indpenpress’s list for 2010. I know Charlie from around here and hand picked him from watching him do a lot of readings at short story events here in Brighton. He is also a press officer by trade so I think that helped. I think he caught a real zeitgeist with the whole mod thing, too.
What are your thoughts on eBook pricing?
It makes so much sense to sell them much cheaper than print editions most especially for us as a publisher. Kindle versions are extremely easy to produce and because I have an in-house typesetter and an art department at my disposal, all the files are there ready for me. I can do five an hour, be damned. As a publisher it would be criminal for me to even consider factoring my time into a Kindle production hence I sell ours at around ten times cheaper than their print counterparts. How the hell do mainstream publishers reckon it is ok to sell their Kindle editions at over and above the hardback cover prices of some titles, can you answer me that?
What are your marketing strengths?
Good logo, name and artwork as well as four years experience as a marketing manager for a publishing house.
What makes you angry about the current publishing industry?
Conservatism and greed. I can’t stand the fact that there’s all these middleclass bastards acting as a gatekeepers to what I read. It amazes me how a lot of people in the publishing industry don’t realise that literature is probably the most subjective of the arts for those that enjoy it. But due to the lack of foresight and haughty attitudes from many publishers, agents, book reviewers and even authors, the bookshelves are crammed with the same old same old. There needs to be alternative choice in fiction like there is in music. Open up the market with more choice and more authors will, I reckon, provoke more reading. 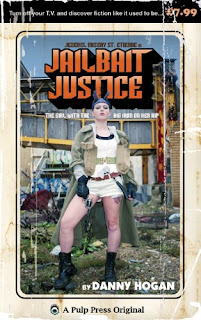 How much difference does a good cover make?
That old chestnut about never judge a book… is a load of bollocks. A good cover makes all the difference. Visual stimulation is incredibly important and must be taken into account when doing your cover. Always seek the advice of a professional designer if you are setting out to do your own ones. It’s amazing what they know about lettering, images, structure and all that.
How important is a good title?
Very important, I have to admit that my wife has a lot of involvement in that aspect of Pulp Press. It must stand out and not be one of a hundred similarly titled books. What I suggest is go around asking people about your title ideas, study their reactions, and listen to their feedback.
How important is a book's central character?
Absolutely essential. How many truly original stories are there? It is a good strong character that governs the pace and course a situation(s) takes that creates a great story.
What's your favourite aspect of being a publisher?
Giving the talented a chance.
What are your strengths and weaknesses as a publisher?
Weaknesses:
As I am doing this pretty much by myself I don’t have the amount of time I would like, particularly with new submissions.
Not making enough money to invest, and having to do everything on the cheap.
Could do with a higher level of copyediting, something I am working to rectify.
Strengths:
Not afraid to work with new stuff from a variety of genres.
Have a clear idea of what I’m doing and what I want to achieve.
I will not be fucked with.
What aspects of marketing do you enjoy?
Researching the best places to send review copies out to for a title, and then sending out and seeing what the response is.
As a publisher, how would you describe your ideal reader's taste in crime fiction?
That they prefer a vigilante to a copper.
What was your favourite book as a child?
The Rats by James Herbert. I know it ain’t a kid's book but then again A Clockwork Orange ain’t traditionally a kid's film either but that’s what I liked to watch as a young’un… with some Ghostbusters on the side of course.
What was the last good eBook you read?
Bye Bye Baby by this Scottish geezer… I can’t remember his name.
What crime book are you most looking forward to reading?
Truth Lies Bleeding by Tony Black. Yeah mate, it’s next on my pile. After that it will be The Bastard Hand by Heath Lowrance. Can’t wait, it looks amazing.
What are you reading now?
The Crossing by Cormac McCarthy as well as re-reading the Punisher Max series by Garth Ennis. Garth is the don and a huge influence for me.
If you had to re-read a crime novel right now, what would you choose?
Pop. 1280 by Jim Thompson. A-bloody-mazing.
Who's your favourite living writer?
Cormac McCarthy 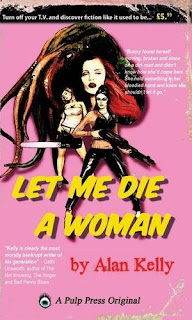 How do you create 'word of mouth'?
It’s about getting column inches and getting mentioned as much as possible. Social networks such as Twitter are good for this, but Facebook can be a case of preaching to the converted, as Jay Stringer would say. You have to be careful about not overdoing it though. You’ll run the risk of turning people right off if you do.
How effective is advertising?
Just recently I spent a load of money I didn’t have on advertising and it doesn’t seem to have done that much if you take into account the cost. If you’re short of cash I recommend putting your efforts into getting reviews.
What are the biggest problems facing publishers these days?
Keeping print books viable and in the game.
What are the greatest opportunities facing publishers these days?
Mainstream booksellers tend to have a haughty attitude to who they deal with and are prone to committing to exclusivity deals, not to mention their hooky bestseller charts. Amazon on the other hand, who look like they’re taking the lead with bookselling,  don’t give a damn who you are or who published you just as long as they can sell it. So it looks as if the playing field is evening out a tad.
How do you feel about writers self-publishing?
What, like Edgar Allan Poe? Love him. If you have a story that you believe some people want to read, put it out there. Fuck what some tart with their poncey offices, associations and mates in the broadsheets thinks.
Which author should be much better known?
Cathi Unsworth, without a doubt.
Posted by Allan Guthrie at 04:32