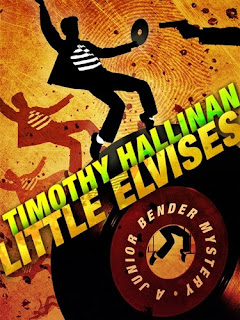 Little Elvises by Timothy Hallinan
£2.13/$2.99
Amazon UK, Amazon US
Timothy Hallinan, both Edgar- and Macavity-award nominated in 2011, is the author of the Poke Rafferty Bangkok thrillers and the Junior Bender Mysteries. This year, he conceived and edited an ebook of original short stories by 20 well-known mystery authors, SHAKEN: STORIES FOR JAPAN, with 100% of the price going to Japanese disaster relief. His most recent book is the Junior Bender ebook, LITTLE ELVISES.
Can you sum up LITTLE ELVISES in no more than 25 words?
A thriller with a laugh track, set in Los Angeles, with roots in the 1960s imitation Elvises. Almost everyone, including the hero, is a crook.
What was your motivation for writing it?
I wanted to make myself laugh, for one thing. The first-person narrator of this series, Junior Bender (I didn't know—until Zoë Sharp told me—what “Bender” means in British slang), is a burglar who moonlights as a private eye for crooks. Junior operates on a moral scale that interests and amuses me. He's a career criminal, but he's also an unhappily divorced man who worships his daughter, and—within broad limits—he always keeps his word. Junior's voice was in my ear the entire time I wrote the book.
Also, I always found the Little Elvises, most of whom had careers that could be measured in months, both funny and sad, which I think is a great combination.
How long did it take you to write?
Seven weeks to a full first draft, because once Junior starts, he won't let go of me. I wrote the first book about him, CRASHED, in five weeks, which is the fastest ever for me.
How important is a book's central character?
It's pretty close to everything, especially when that character is written in first person. He/she is the reader's guide and companion. If the reader doesn't want to hang around with the central character—well, there are a lot of other books out there.
What's your favourite part of the writing process?
Finishing.
Ever tried your hand at screenwriting?
When my first series of books came out, in the 1990s, I got a call from a very big producer, who shall remain nameless, asking whether I'd like to make obscene amounts of money as a dialogue doctor. I said yes and got a script someone had obviously slaved over for God only knows how long along with a bunch of notes about how to make some scenes stronger. The dominant voice in this process undoubtedly belonged either to the lead actor or his agent, because over and over again, I was instructed to give him the closing line in a scene, and make it a grand slam. I was also, for two scenes, asked to give him a specific number of additional words – say, 48. That drove me crazy until I counted the words for him and the other actor/actress in each scene and learned that 48 new words would give that character one more word in the scene than the other character had.
I sent the script back and begged off.
Do you have any other projects on the go?
I'm most of the way through the fifth Poke Rafferty Bangkok thriller, THE FEAR ARTIST, and I've got about 20,000 words on the next Junior, MUTHER'S DAY. And I get up every day full of anxiety about whether the day's work will be any good and also thrilled silly that I get to do this for a living.
Little Elvises by Timothy Hallinan
£2.13/$2.99
Amazon UK, Amazon US
Posted by Allan Guthrie at 05:38