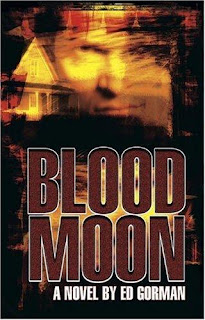 86p/99c
Amazon UK, Amazon US
Ed Gorman has been publishing crime novels for more than a quarter century. Lawrence Block has called him "A terrific writer" and The Drood Review noted that "Gorman is one of the masters of the detective genre." His work has won the Shamus and the International Writers Award plus been shortlisted for the Edgar and the Silver Dagger.
Can you sum up Blood Moon in no more than 25 words?
Here’s a quote from Scotland on Sunday: “Blood Moon has everything--prison drama, horror story, whodunit, psycho-thriller--all skillfully combined to lead you to a shock ending."
What was your motivation for writing it?
I wanted to show readers that something different could be done with the standard serial killer tropes and I wanted to write an ending readers would remember for a long time.Plus the characters worked on me day and night. They became real to me in the course of writing the book.
How long did it take you to write?
Five months.
How much difference does an editor make?
There are editors and editors. I once had an editor who saved a book I was plodding through. And I once had an editor who, in my estimation, was ruining my book. I bought it back rather than make the changes and it turned out to be one of my best-reviewed novels. Generally I’ve been happy with the editors I’ve worked with. They have sound ideas.
How important is a book's central character?
I “hear” my stories and books. Voice. And this always comes from the central character. I’ve thrown away as much as two hundred pages on some books because I couldn’t “hear” them. Once I do I work quickly.
What's the best piece of craft advice you've been given?
Never reread until you’re finished with the first draft. Max Allan Collins told me that after I’d failed to finish numerous first novels. His advice really helped me.
What's the best piece of business advice you've been given?
You know, everything’s changed so much most of the advice I valued over the years is now irrelevant. This is a mysterious new world for most of us, Kindle, Nook, etc, almost science fictional in some ways.
What's your favourite part of the writing process?
Having a good day working. And then, the finest day of all, finishing.
What are your strengths and weaknesses as a writer?
My strength is generally character and my weakness is generally glibness. I have to watch myself with the latter.
What aspects of marketing your book do you enjoy?
I really don’t enjoy any of it.
As a reader, how would you describe your taste in crime fiction?
Because I edited Mystery Scene magazine for eighteen years, I pretty much sampled every kind of mystery fiction. I even read a few cozies I liked. Early on Nancy Pickard, for instance, was giving the form real grit. Most of the time though I prefer darker stories and novels.
What was the last good eBook you read?
Dying Memories by Dave Zeltserman. A fine piece of work.
If you had to re-read a crime novel right now, what would you choose?
I’ve been meaning to re-read The 31st of February by Julian Symons. It’s one of the few believable books in which the central character is insane. You don’t realize this at first but Symons cunningly plants clues from the first.
From an artistic rather than financial perspective, what book do you wish you had written?
The Chill by Ross Macdonald. To me it’s the only perfect private eye novel. And a damned powerful one.
Blood Moon by Ed Gorman
86p/99c
Amazon UK, Amazon US
Posted by Allan Guthrie at 02:50