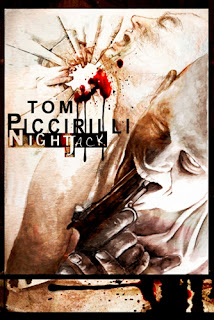 Nightjack by Tom Piccirilli
$4.99/£3.56
Amazon US, Amazon UK
Tom Piccirilli is the author of twenty novels including SHADOW SEASON, THE COLD SPOT, THE COLDEST MILE, and A CHOIR OF ILL CHILDREN. He's won two International Thriller Awards and four Bram Stoker Awards, as well as having been nominated for the Edgar, the World Fantasy Award, the Macavity, and Le Grand Prix de L'imagination. He blogs at The Cold Spot.
Can you sum up your book in no more than 25 words?
A noir-dark fantasy about 4 escaped mental patients suffering from multiple personality disorder. One of their 187 alternate personalities may have committed a rape/murder on the ward.
What was your motivation for writing it?
I was interested in doing a crossover novel steeped in the noir tradition but also with the added oddity of (possibly) being a fantasy, where my protagonist can see and interact with the various alternate personalities, including gods, historical figures, private eyes, gunslingers, sorcereresses, and the recently dead.
Who designed your cover?
The brilliant artist Caniglia illustrated and designed the cover with a couple of small bits of advice from me.
How much difference does a good cover make?
In traditional publishing a hell of a lot.  I'm still trying to figure out how important it is in ebook releases.
What's the best piece of business advice you've been given?
Do not, under any circumstances, become a fucking writer.
As a reader, how would you describe your taste in crime fiction?
I dig classic noir and neo-noir where the hero is struggling to retain some semblance of his honor but is pushed beyond endurance down the wrong path by fear, failure, heartache, the love of the wrong woman, or simply the whim of fate.
Who's your favourite living writer?
All my heroes are dead.
From an artistic rather than financial perspective, what book do you wish you had written?


The Dead Father by Donald Barthelme.  It's my favorite book.  A haunting, hilarious, fantasy of sorts, literary, bizarre, honest, bitter, and beautiful.
Nightjack by Tom Piccirilli
$4.99/£3.56
Amazon US, Amazon UK
Posted by Allan Guthrie at 04:49